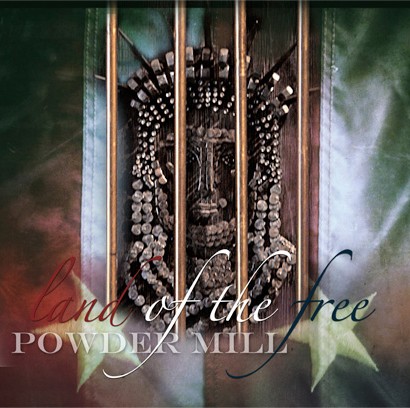 Land Of The Free

It’s a rough America out there, but good luck finding anyone playing Southern rock music more fraught than this. The Missouri foursome’s ferocious new album, “Land of the Free,” depicts red state desperation in hi-def technicolor — a place where blue-collar survivors are free to dream, free to worship early Skynyrd, free to hate the cops, free to hate themselves. Few country-rock songbooks are this brutally honest. And fewer are this flat-out brutal.

×
Update Required To play the media you will need to either update your browser to a recent version or update your Flash plugin.

Powder Mill is proud to announce the release on 9/11 of “Land Of The Free,” the 5th album to be included in the Mill’s arsenal.

It features eleven original songs, most of which were tracked in early 2012 within the walls of Jim Dickinson’s legendary Zebra Ranch Studio in Coldwater, MS. Those sessions were produced by Cody Dickinson, whose diverse instrumental capabilities are featured in several songs on “Land Of The Free.”

Mississippi’s own Jimbo Mathus also made a guest appearance to lend some of his catfish music vocals to “Mississippi Showboat” which was co-written by Powder Mill’s stepdaddy Fred Friction.

The band brought the tracks home to their beloved Trumble Hill Studios in Carter County, Van Buren, MO to finish recording the album. Powder Mill’s own Jeff Chapman, along with Mark McPheeters, mixed and produced “Land Of The Free,” incorporating the distinct home-grown Ozark grit and feel that Powder Mill fans have grown accustomed to.

Verisimilitude isn’t a word you’re likely to hear out of Powder Mill but it’s the one that fits. Everything about these Missouri men feels damn real: salt of the earth substance apparent in every tune, every rugged but right vocal, with every line ringing true and strong backed with the kinda muscle that lays a body flat.

A palpable sense of place permeates their music, deftly carved mountains and rivers winding through their tunes, the backwoods stills and boogie shacks breathing along bad roads everyone knows you just shouldn’t wander down but do anyway because, well, human nature – something this band understands very well, clearly fellas who’ve spent a few nights in jail AND learned a thing or two from it.

But these are no wannabe outlaws, just guys telling it like it is, unvarnished reports from the blue collar trenches, putting melody to every solitary late night thinker wondering, “I’m working this damn hard and this is all I’ve got?” There’s a healthy measure of early Asbury Park Springsteen to the gritty pondering of The Land of the Free, which strives to drag Jesus from the dark side of town, eager to bring the good word to every battered, struggling soul living on the ragged, shadowy edge.

Make no mistake, this is rock ‘n’ roll that needs no adjectives (modern, classic, Americana, etc), but this is also unabashedly country as fuck, embracing the world outside big cities and tied to the land and its cyclical flow in tangible, lived ways. In this way and many others, Powder Mill are the true sons of Ronnie Van Zant, with a game that’s tight, tough and fired up about all the right things – family, freedom and fun – and a surprising tenderness that slips in between all the fisticuffs, hot messes and weed running in their tales.

Their willingness to tussle extends to love, understanding that the real thing has to be fought for and defended with all one’s might, perhaps most so against one’s own failings and dumb decisions.

Powder Mill, particularly on The Land of the Free, put the lie to notion that they don’t make ‘em like they used to. This is a band that can proudly stand shoulder-to-shoulder with pre-plane crash Skynyrd, Ozark Mountain Daredevils, The Black Crowes and contemporaries like The Drive-By Truckers and Slobberbone as torchbearers for rock rooted in unremittingly honest soil that takes full advantage of Southern musical traditions – People’s Music made by real people with more heart, balls, raw charm and natural talent than most God made.
–Dennis Cook 2013 (“Land Of The Free” Liner Notes)